Never Too Old for Disney... 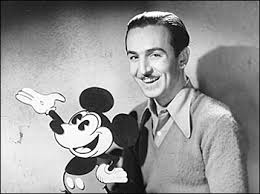 In preparing for today’s class, one leader and his legacy immediately came to mind while reading the excerpt on “Responsible Leadership” from Selznick’s Leadership in Administration. Walt Disney, the famed creator of Mickey Mouse and a multitude of other characters, built an entertainment empire based on the simple mission statement, “to make people happy.” With this vision in mind, The Walt Disney Company continues to produce high-quality family entertainment in a myriad of different markets. This vision statement provides a solid foundation for goal-setting, which Selznick states, in order to be “institutionally meaningful, is framed in the language of character or identity, that is, it tells us what we should ‘do’ in order to become what we want to ‘be.’” Disney’s does just that – although their consumer reach is extremely diversified, all corporate efforts and initiatives have their roots in providing entertainment, or making people happy.

Furthermore, Disney models what Selznick describes as creative leadership. More than being a creative genius and the head of an organization, Selznick claims this practice has two aspects that synthesize the two roles: “the institutional embodiment of purpose” and the exercise of creativity “by strategic and tactical planning.” Disney’s commitment to the former can be seen in the development of Disney University, an intensive onboarding program for what one might consider the low-ranking employees: the costumed characters that wander around at amusement parks. However, Disney leaders choose to invest in their training to ensure that the organization’s mission and culture permeates the on-the-job attitude and behavior of all their employees. As Selznick noted in an earlier chapter of this book, “Truly accepted values must infuse the organization at many levels,” and this assertion is evident and applied within the Disney culture.

The second aspect, the strategic and tactical execution of creativity, is clearly a part of Disney’s legacy as well. Walt Disney’s cartoon studio blossomed into a multi-billion corporation through a gradual expansion process. Walt was eager to try new things, moving from short cartoons to films to merchandise to theme parks to digital animation and beyond. Each of these initiatives that originated internally within the company reflected the “changing relation between the organization and its environment;” as consumer demands of the entertainment industry evolved, Disney has adapted and delivered in creative and innovative ways.

Ultimately, Walt Disney successfully took on one of the prime functions of leadership, according to Selznick: “ the task of building special values and a distinctive competence into the organization.” Disney’s core values and vision of making people happy has cultivated not only a strong and profitable organization, but a followership that extends beyond the Disney family of employees to the millions who enjoy Disney’s creations time and time again.